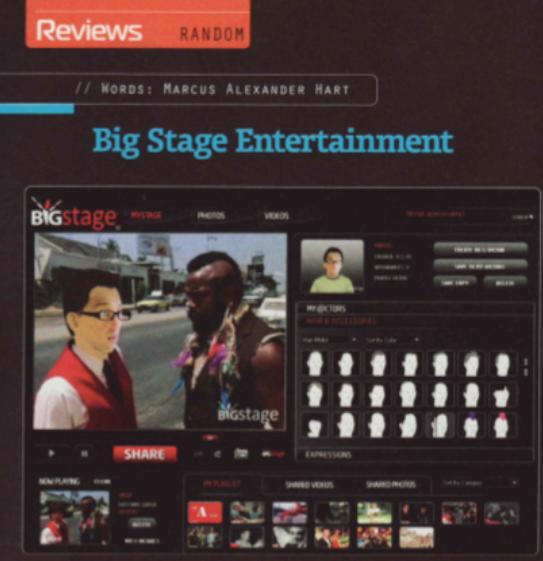 Startup Big Stage Entertainment – Marcus Alexander Hart writes about how he remembers the movie S1mOne? Marucs covered how Al Pacino had a digital actress with him that he could constantly and freely drop into any movie of his choice at any time. Marcus covered Big Stage well when he credited us with taking the first steps toward making what he called a “batshit technical fantasy” into a reality.  He describes to his audience that it simply takess three pictures of your face, how we allowed him to choose his hairstyle and glasses, and moments later he claimed to have seen a “disturbing Java doppelganger” mugging back at him.

Marcus really got into our little Startup by add that with a few more clicks he had mapped himself into footage from the A-Team, The Greatest American Hero and a bunch of our black-and-white clips from what he called  “The ol’ public domain barrel”. Here what Marcu’s overall assessment was of our Startup’s new technology:

S1mOne it ain’t, but if you have some understanding of how difficult it is to turn a handful of pixel data into a real-time, speaking, acting double of Johnny from Night of the Living Dead, Big Stage is pretty incredible.  If you’re the other 99% of the population, you’ll just enjoy seeing your own rasterized puss starring as the foo’ that Mr. T pities.

Marcus’s overall Verdict was that our Startup wasnt the “death of real”, but, it was still really fun.