Blog - Latest News
You are here: Home / News / Digital Podcast 52: Everyone Can Be a Star

Imagine if you and your friends could star in a music video, famous movie clip, or commercial as realistically as if you were around for the shoot. Jonathan describes the company and the potential that its technology has to transform advertising and the audience relationship with movies, television and videogames.

In the interview, Jonathan describes his early start as a wunderkind discovered by SoCal VCs (0:00), his insight into the coming importance of personalization as he discovered the technology behind Big Stage (2:45), and how he helped move the technology to become consumer internet capable and fundable (7:05).

He talks about the current business, his monetization model through brands and content partners based on the technology’s dramatic impact on advertising effectiveness (11:35), and what the big media networks are seeing in terms of monetization and CPM rates (16:12). He also describes privacy considerations (17:40) and the other cool non-advertising stuff, like videogaming and short internet adventures, that Big Stage will be making possible (19:05). 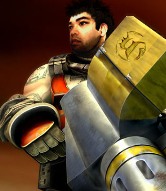 Jonathan in a Video Game

Jonathan Strietzel is co-founder and chief creative officer of Big Stage. He brings 10 years of experience as an entrepreneur in the entertainment and technology industries, including founding Stritz Studios, a boutique special effects studio. He has also invented multiple systems for delivering digital advertising and currently holds a U.S. patent for his work in particle-based advertising. In addition, Jonathan has worked with numerous TV studios and Fortune 500 companies, including developing the highly publicized online clue delivery system for NBC’s “Treasure Hunters.” Jonathan graduated from Chapman University with a Bachelor of Science degree.